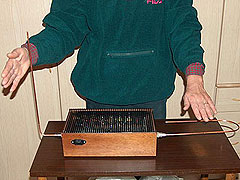 The magic of THEREMIN
What is it? History and evolution.
Theremin is an electronic instrument whose sounds are generated on the basis of the Hetherodine principle (thestriking of two frequencies).
Two frequencies are made to strike among each other. The result generates, among others, a frequency signal that is the difference between the two fundamental frequencies. Since we’re dealing with radio frequencies (800 Khz) it is possible to vary one of them, by means of capacitance variations, acting on an external antenna. This can be achieved by moving in and out an object (usually an hand) around the antenna itself.
The generated audible signal can be amplified like any other electrical signal.

Its first introduction, in the early 20’s, was of great success due to its unique sound, its original way of playing by means of the conductor’s gestures.
Maestro Leopold Stokowski, was among the few who played it in a formal orchestra in the 1930’s. RCA who owns the product thought that every cultured home should have a Theremin, but things did not work out that way for a lot of reasons.

The inventor was Lev Thermen, a Russian gentleman, who moved to New York in 1920, anglicized his name to Leon Theremin and began calling the instrument by his new American surname of Theremin.
Today Theremins are scarcely used but where special sound effects are required there is no substitution; it is being built using modern transistors technology, but the heterodyne principle has remained intact. To investigate further, try a Web search by “Theremin”