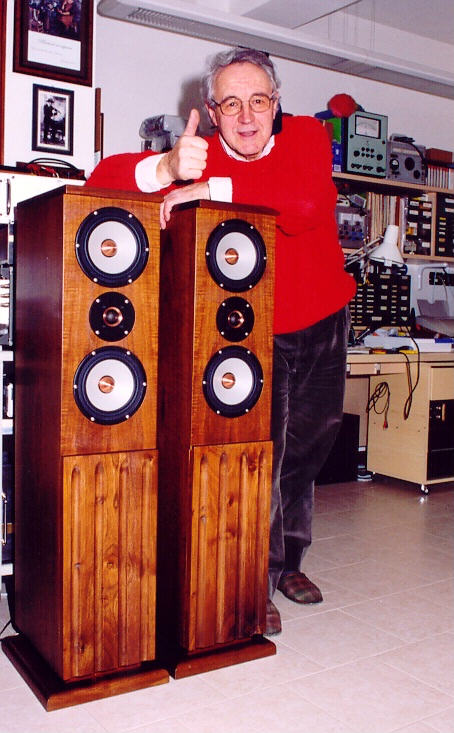 Preface:
The project has been designed by Dr D’Appolito and has been published in the May 2002 issue of audioXpress magazine. The detailed description substantiated by a great deal of technical details had convinced me of the excellence of this project. However I did not like the exterior design of the tower (what was published was a prototype) and decided to find a better (de gustibus…) aesthetic while rigorously maintaining all other characteristics including, of course, the speakers. The result was to my satisfaction and I decided to submit my work to Edward T. Dell to publish it in his audioXpress magazine. He agreed and my article and photos were published in the August 2003 issue with additional commentary and critique.
With reference to what was published, I, afterwards made a couple of changes by using Solen components for the crossover and added an input terminal to provide for a bi-wiring

Italian restyling of a pair of fantastic THOR Transmission Line towers.
With this article I’d like to share, with AudioXpress readers, my piece of work devoted to restyling THOR towers.
The Joe D’Appolito project has been described in the AudioXpress May 2002 issue.
In the September 2002 issue, a detailed step by step do-it-yourself construction description has been published by Edward T. Dell, Jr.
The following is my version of this project which departs from previous ones in the area of external design. As it turned out, I was so delighted of what I had done that I wanted to share my experience with AudioXpress readers.
While maintaining the exact specifications of all internal measurements, in order not to alter the quality/performance, I wanted to give this project a better look as its superb sound quality deserves.
What, I thought, could be improved over previous projects/prototypes was:

With that in mind I prepared a few sketches and with the help of some friends, who looked at the different options, I decided to proceed with the one depicted in photo 1.
You can see there:

Drawing a sketch was the easiest part. Yes! The easiest part, because building a high quality Thor TL is NOT an easy task at all.With the help of a professional joiner, my friend Siro, I had most of the work done in his highly qualified joinery. He did every step with extreme ease, however he complained about the use of MDF which, in spite of his dust collector system, seemed to create dust all over. The sequence of photos, better than my words, can give you an idea of the process and changes.I would like to comment on the solution I’ve taken to prepare the holes to fix the speakers.
Since MDF isn’t any good at retaining screws, especially if you have to remove them a few times, I’ve implemented the solution to insert, on the back side of the front panel, a number of “T-nuts” which give the possibility to remove the screw as many times as you want.

All major parts were assembled using “biscuits” and waterproof glue, as required.
The base, as seen in the photo, contains the crossover (photo1/photo2) mounted on an aluminium plate which is screwed to the bottom of the base itself. The base is attached to the tower with four screws to the bottom side of the “corners”, once the filling material has been properly put in place. To allow the screws to firmly hold the base in place, the corners were made of 1,5 inch marine multi-layer wood instead of MDF.
Of course the varnishing on the veneering, took place just after the final assembly. I selected a walnut colour to match the furniture of the house. Speakers were installed as last step.
Time has come to hook them up to my 90 pounds 8 x EL34 25 W power amplifier driven by a PST 200 preamp, both self-made, vacuum tube tech, and listen to the splendid voice of Amanda McBrown on her LP direct disc recording.
AudioXpress experts have described the exceptional sound quality of THOR TL. They were right on. Thor TL towers is an outstanding piece of audio equipment. Audiophiles who do not have them or have not listened to them, do not know what they’re missing.

Edward T. Dell Jr. comments
I congratulate reader Atto E. Rinaldo on a beautiful realization of Joe D’Appolito’s THOR design using the quite impressive SEAS drivers. His base is certainly an improvement in appearance. The changes to add a grille have some hazard however.